Merged with HAL as Halman

Dr. David “Dave” Bowman is a central character who appears throughout the science-fiction Space Odyssey series. He is the main protagonist of 2001: A Space Odyssey in both the novel and film. He becomes a non corporeal entity in 2010: Odyssey Two the novel, and in the movie adaption, 2010: The Year We Make Contact. In the two movies, Bowman is played by Keir Dullea.

David Bowman is the mission commander of Discovery One, as well as the sole survivor of the disaster that occurred aboard the ship. During the flight, the on board HAL 9000 computer malfunctions, killing all the crew except Bowman (though HAL tries to kill him, too, by refusing him reentry into the pod bay). Bowman eventually gets inside and disconnects HAL, to prevent him from doing further damage.

When Discovery arrives at Jupiter, a second monolith is discovered, identical to the one found on the moon—except this one is nearly 2 kilometers long, at the L1 point between Io and Jupiter. Bowman uses an EVA Pod to get a closer look at the monolith. When he gets there, according to Arthur C. Clarke's dialogue, he observes, "The thing's hollow—it goes on FOREVER—and, oh my God, it's full of stars!" Bowman, pulls into the monolith and transports across vast distances. He transforms into a being whom Clarke called the "Star Child," free from the evil tyranny of matter, free to move about in space and time.

Dave Bowman was one of the five men, along with the HAL-9000 supercomputer, in a spaceship, the Discovery, traveling toward Jupiter. He and his deputy, Frank Poole, were the only astronauts not in suspended animation, and neither knew the true purpose of the mission. For much of the mission, things went normally, with Bowman and Poole proceeding with their various tasks.

However, HAL gradually began to exhibit human like curiosity and perhaps an act of deceit. After failing to engage his human crew mates in a discussion of speculation about the purpose of the mission, HAL predicted a malfunction in the AE-35 antenna unit, which allows communication with Earth. The AE-35 replacement procedure requires turning of the antenna 180 degrees away from Earth and allows HAL to investigate and perhaps communicate with the subject of his curiosity. After Bowman removed the unit and he and Poole examine it, they found no problems. HAL suggested that they return the unit and wait for it to fail.

Growing uncertain, Poole and Bowman entered an EVA pod and shut off the radio, preventing HAL from hearing. They discussed the errors the computer was suddenly developing, and they decided that the best thing to do was to take the computer's advice. They also realized that they may have to disconnect HAL.

Bowman sat on the bridge while Poole left the ship to return the AE-35 unit. Monitoring the external cameras, Bowman was surprised to notice Poole's suddenly drifting off into space. Bowman left the Discovery in an EVA pod and eventually managed to recover Poole's body, though by now it was too late: Poole's oxygen line had been severed, and he was dead by the time Bowman reached him. Bowman nonetheless carried Poole's body back to the Discovery, only to be refused entry by HAL. HAL revealed that he was aware of the astronauts' plan to disconnect him, having read their lips through the window of the pod. Bowman decided to enter through the emergency airlock, even though he was not wearing his helmet. He managed to open the airlock and blew the explosive bolts on the rear of the pod, allowing the force to expel him directly into the airlock. He managed to reach the lever to seal and repressurize the airlock.

Bowman took a space helmet and, despite HAL's pleading, began to move toward the mainframe room. Bowman slowly disconnected HAL while ignoring the computer's pleading. HAL began to talk about his life, telling Bowman that one of the first things he was taught was a song; when he asked whether Bowman would like to hear it, Bowman agreed. After HAL was finally shut down, Bowman found a recorded message explaining the true purpose of the mission.

Bowman spent several months alone on the Discovery. Eventually the ship reached Jupiter orbit, where Bowman found a large monolith. He reported the finding to Mission Control and then went to examine it in an EVA pod. The monolith unexpectedly opened, and Bowman entered. His last words to Mission Control were "My God, it's full of stars." Bowman passed through the Star Gate, a strange passageway that led him to what looked like a hotel room. He manifested first as an older man and then as a decrepit elderly man before evolving into the Star Child.

After Bowman had entered the Star Gate, he had become the Star Child. He reaches out to loved ones, through a signal transmission that interrupts their television sets. He gives a word to his hospitalized mother, and to his wife, Betty (a former lover after the death of his brother, Robert Bowman). After the HAL 9000 is reactivated during the Leonov mission, Bowman uses HAL to send a message to Heywood Floyd’s team, warning them that they need to leave Jupiter quickly. When Floyd doesn’t believe HAL, Bowman takes physical form, explaining that they need to leave quickly before "something wonderful" happens. Ultimately, the Discovery has to be left behind, and Bowman downloads HAL's consciousness into the monolith.

In 2001, Bowman had been chosen for the Jupiter mission mainly for his lack of connections to family and friends. Dr. Walter Curnow, having once met the astronaut before his departure, described Bowman as cold and antisocial. During the Discovery mission, this trait could be seen clearly, as Bowman never really came to regard his partner, Frank Poole, as anything more than a close coworker. This was also the way he regarded the HAL-9000 on board the Discovery, until they merged within the monolith.

Bowman's personality are very different in 2010: The Year We Make Contact; in this film, as a result of his evolution starting from his contact with the monolith, he is seen interested on the survival of Leonov's crew, as seen when, he contacts to Heywood Floyd to warn him that all the crew of Leonov must leave quickly from Jupiter because "something wonderful" is going to happen, but he cannot tell Floyd what exactly; also, he visits his hospitalized mother, and then his wife, Betty, even asking her about his son. These events differ slightly in the 2010 book. Bowman's older brother had died of carbon monoxide poisoning during a scuba dive when he was young, and Dave came to meet Betty because she had been his brother's girlfriend. She is not his wife and has been separated from Bowman for over a decade, and although she states that her child is Bowman's, it is revealed at the end of the chapter that this child is not Bowman's. He had not been close to his mother, who later died in 2010.

In 2061: Odyssey Three, Bowman is discovered by Heywood Floyd, alongside the HAL 9000 in the Europa monolith.

3001: The Final Odyssey introduces the merged forms of Dave Bowman and HAL, the two merge into one entity called "Halman", after Bowman had rescued HAL from the doomed Discovery One spaceship at the end of 2010: Odyssey Two.

David Bowman in an EVA pod.

Another shot of David Bowman in an EVA pod. 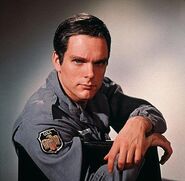 David Bowman with no space suit.

David Bowman on the TV.