Discovery (then Discovery 1 or Discovery I, when determined that a second one was needed), was a manned American spacecraft designed specifically for Project Jupiter[1] in Arthur C. Clarke’s 2001: A Space Odyssey and the film adaption.

Discovery was made for Project Jupiter c. 1994, and was designed by Walter Curnow. It is 140 m in length. Its propulsion system is powered by a nuclear-powered magnetoplasmadynamic drive. 80 m of structure separate the reactor from the spherical crew habitation module, which consists of a pod bay, a centrifuge (which generated about one-sixth g), and the control deck. A supercomputer, designed by Sivasubramanian Chandrasegarampillai, was also onboard, known as HAL 9000, installed in a logistics and memory center that is off-limits to the crew.

Discovery’s original mission was to observe and study Jupiter, but was later repurposed to investigate a mysterious radio signal detected from Saturn’s moon Iapetus. The mission’s director was Heywood Floyd. The flight-crew consisted of five astronauts, with three (Hunter, Whitehead and Kaminsky) in cryogenic hibernation while en-route. Frank Poole and David Bowman are on active duty, monitoring the ship’s activities. An onboard supercomputer called HAL 9000 assists in maintaining ship functions. Their days are highly structured to ensure the continued success of the mission and to make sure that nothing goes wrong.

However, once in the Jovian system, the Discovery’s system fails, HAL 9000 “malfunctions”, and those in hibernation are killed. Poole is also killed on active duty, and Bowman goes missing from the Discovery. The failure of the mission in 2001 results in the USAA being dissolved and absorbed by the National Council of Astronautics (NCA). Heywood Floyd is forced[2] to resign.[3] He carries guilt over the loss of his men, which later moves him to join the Jupiter Mission (2007-2010).

When a last minute mandate was given to Discovery to investigate Saturn’s moon Iapetus, it was determined that it may not have enough resources for a return trip home. In essence, a “rescue” ship would be needed to assist the Discovery crew back to Earth. Construction of Discovery 2 went under way after 1999. When it was determined that Discovery failed, and was parked in Io’s orbit,[4] a space race ensues between China, the Soviets, and the USA as to who would get to the Discovery first— Tsien (China), Discovery 2 (USA), or Titov (Russians).[5][4] Since the Russians were ahead of the game, a joint Soviet/USA mission is established, with Heywood Floyd as consultant. The Titov/Leonov spacecraft is designated to salvage Discovery at the inner Lagrange point on the line between Jupiter and Io.[6] 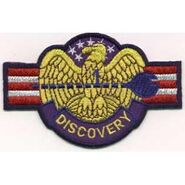 The long, slender structure of Discovery